Is Twilight the modern Pride and Prejudice? There are some interesting parallels.

Yesterday I listened to a lecture from the Kid You Not Podcast in which Clementine and Lauren discuss the appeal of dark paranormal romance among teenage girls. This reminded me of a lecture delivered by La Trobe University’s David Beagley.

Fiction For Young Adults, Lecture 9: What it is to be young and in love, available on iTunes U.

The Importance of Romance in Pop Culture

The lecture opens with a clip from South Pacific, Some Enchanted Evening

About 95% of all pop songs are about romance, the pairing up of people.

Pride and Prejudice is arguably the most popular romantic novel in the English language.

A lot of the elements — the crowded room, the fly to her side — can also be found in Some Enchanted Evening. These are nowadays clichés, the standard building blocks of the romance story which are used and reused.

Lee from Marvels and Tales Guilty Pleasures: reading romances as reworked fairytales (2008) looks at the form and structure of the typical romance novels.

Greenfield’s Absent Minded Heroine or Elizabeth Bennett has a thought, looks specifically at Pride and Prejudice and looks very much at the idea of absence: how to fall in love when the person isn’t actually there. The idealisation of the other person, love at first sight, the unreliability of appearance.

Jasna, the Jane Austen Society of North America, looks at the Twilight movies and their relationship to Pride and Prejudice.

One of the few drawings we have of Jane Austen is done by her sister Cassandra. One of the problems with studying Austen is that despite her copious letters, her family destroyed them soon after her death. There are only a few remaining, so it’s difficult to get prime evidence about her as a person. 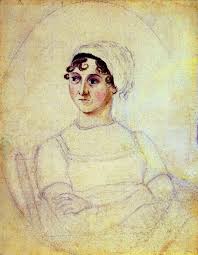 Austen died at 42, not old but not unusual for her time, though it was still young for her class. She was a clergyman’s daughter.

Pride and Prejudice [at time of broadcast] has just reached its double century and is now considered one of the best books of all time, just behind Lord of the Rings in big polls. There have been many adaptations.

For women who grew up in the 1970s and early ’80s — nurtured in the fictions of Ms. Blume, Paul Zindel and Norma Klein among others, writers for whom an urbane brand of social realism was the only reasonable métier — the arrival of the “Twilight” franchise a decade ago, with its enormous success, signaled a gloomy period of regression for the young-adult novel. The first of the “Twilight” books appeared in 2005, two years after Arnold Schwarzenegger became the governor of California amid sexual assault allegations that prompted relatively little of the outcry now bedeviling Donald J. Trump. A distinct product of Bush-era gender politics rather than a renunciation of them, the series ultimately has its heroine forfeit a chance to go to Dartmouth to stay home and tend to her half-vampire baby, one conceived after a night of violent sex that leaves her body bruised with a husband who is at least 100 years old.

Now, though, the appetite for paranormal lunacy has abated, and issue-driven fiction set very much in a universe of urbanism’s chief concerns is having a renaissance.

What do Pride and Prejudice and Twilight Have In Common?

A young adult girl as protagonist

Independent minded, pretty, intelligent, speaks her mind. (Bella Swan is an unsubtle use of names. Think of Hans Christian Andersen’s The Ugly Duckling. Bella means beautiful, swan shows that she is beautiful – it is only to herself that she is less than beautiful, yet she is popular with boys [and suffers no prejudice regards beauty], so within the world of the story is obviously beautiful  and exotic from anyone else’s point of view.)

This is similar to Elizabeth Bennett, who sees Jane as the beautiful one.

These are characters who are the standard bearer of what it means to be an attractive female in their own milieu.

Both protagonists live in rural backwaters, with not quite the loving, supportive family. Each is the sensible one who keeps it all together.

Family of Lizzie Bennett is not rich within he social circle of Hertfordshire, in a little village Longbourne, out in the sticks (even though these days easy to access by train from London).  Bella lives in Forks, North Washington, moved there from Phoenix Arizona, a totally different place where you get to wear short shorts and tank tops – she’s moved to the misty mountains, miles from the decent shops, she has to plan a shopping visit for a full day to do some decent shopping for dresses. Her parents have separated. Mum’s got a baseballer boyfriend for a second husband and Bella is having to choose between her mother and father. She is the one being sensible and deciding. Instead of the sisters she’s got the ditzy fashion mad boy crazy friends at school. All they care about is who is aligned with who.

Well-meaning but ineffective fathers. Mr Bennett and Charlie Swan are very similar, each locked into a lifestyle that prevents them doing much for their daughters. Charlie is so used to being on his own that he can’t even cook. All the parents in these stories are largely ineffective.

Both meet a dark, brooding, handsome man. With Lizzie it’s Mr Fitzwilliam Darcy. Both Fitzwilliam and Darcy are names that imply a station within the nobility. Darcy would have originally been D’Arcy, an old French name, just as his aunt Lady Catherine D’Burg was named. They were not Germanic peasants. To have a name with French origins meant an old, established family. The Fitz of Fitzwilliam means that one of his ancestors was the illegitimate son of a noble. It was better to have an heir than not to have an heir, so illegitimacy wasn’t seen as a major problem, mainly because most marriages were not for romantic love but for convenience. If one wife can’t produce a male heir you just keep going through wives until you get one.

Edward Cullen. Something mysterious about Darcy and Edward when first appearing. So much emphasis is put on the appearance of Edward, very little on Bella. We only get brief physical descriptions of Bella, mainly from other characters, but every couple of pages there’s something about Edward’s muscular, fine appearance. Darcy is defined by his facial expressions and his moods.

At first Cullen appears to dislike Bella and she him. Same with Darcy and Lizzie. Darcy is out of sorts at the party because he’s just had to buy Wickham off after Wickham got his younger sister into a heap of trouble, and his rudeness towards Lizzie is displaced. Edward Cullen appears to be distant but really he finds Bella irresistible and is feigning disinterest. Both stories are about the unreliability of initial appearances.

The absent-minded heroine: she is thinking of absence. Lizzie only falls in love with Darcy when he is not there. Between her rejection of his proposal when apparently he was the ‘last’ man she would marry and then his reappearance at her house having solved the problem, Greenfield has worked out that Lizzie has seen him for perhaps three hours total. Yet she has fallen in love with him. She builds her epistemology upon how things appear, and it’s only when there’s no appearance there that she learns what Darcy is really like.

Darcy falls in love with Elizabeth when he sees her in her natural state, after tramping across a muddy field. Likewise, when Elizabeth sees Darcy again after reassessing his character he is walking across a field (unlike in the BBC adaptation in which case we have Colin Firth in a wet shirt).

Similarly with Bella it’s when she’s being tracked by a group of guys intent on raping her who is saved by Edward who takes her to a coffee shop that Bella is separated from her ditzy friends who are off shopping. The two are alone, and later they’re in among the flowers in the woods. In both stories, the natural environment is important. Get rid of artificiality then let nature take its course.

But, there are warnings. Lady Catherine D’Burg is a very snobby and titled character who intervenes. She wants her own daughter to marry Darcy (her nephew). Just because you have a title doesn’t mean you have a never-ending supply of money. It’s important that her sickly daughter marries rich.

In the case of Bella the warnings come from a slightly related connection of her father – Jacob and his grandfather Billy’s warnings. Not social suicide but literal suicide – it will kill you. Both characters realise they are in love and they press on. With Bella the predator is James, another vampire, who turns up when they’re all playing baseball in the middle of a storm. (Woebetide any guy with a blonde ponytail – look at that character from the Keira Knightley version of Pride and Prejudice – they’re playing the same trope.)

Disaster threatens but all is saved by the handsome brooding misunderstood man. With Lizzie disaster is averted because her younger sister is no longer living in sin – she’s at least married (which is a happy ending for the times, even though Lydia is married to a man of questionable nature). Darcy saved the social standing of the Bennett girls. In the case of Bella it’s Edward who solves the problem in that they entrap James and rips him into pieces and burns them. (The dance studio burns down so we assume that’s what’s happens.) Who actually has the capacity to enact change? In both cases it’s the dark, brooding, handsome man. The girl is passive. Edward has the power over Bella. She is the bait to catch him. Darcy is the one who goes away and solves the problems. Lizzie doesn’t even know what he’s up to. She only finds out later, just in time for the big celebrations.

Has Stephanie Myer simply copied P and P or are these standard elements?

Both characters are outstanding – gorgeous, intelligent, able to solve problems… but don’t think they are.

There is something at first sight… not necessarily love. But yes, I notice you, you’re something.

Appearances are deceiving. Love at first sight is too corny even for most novelists [and is rejected as such in Pixar’s Frozen, for a young audience], so there’s misunderstanding to begin with.

Lizzie Bennett needs three hours to fall in love with Darcy. Edward need only ask Bella to sit with him in the canteen and wow, we’re in love. How gendered is this? The girl has to wait for the boy to solve the problem until they can live happily ever after.

How set up for sequels is each story? Jane Austen never wrote a sequel to Pride and Prejudice (possibly because she died five years later?) but others have done so. [My favourite synopsis is Colleen McCullough’s version, in which she doesn’t think Darcy is the perfect hero, but rather a grumpy old sod, in which case the marriage is a disaster.]

The Artifacts on the App Store