Chris Van Allsburg is an American writer and illustrator. You’ve probably heard of Jumanji and The Polar Express, which have been adapted for film. Have you read the others?

You’ll hear two main things in connection to the work of this author/illustrator:

THE STRANGER BY CHRIS VAN ALLSBURG (1986)

“The Stranger” is a page turner of a picture book which asks more questions than it answers, and reminds me of the Australian picture book written and illustrated by Shaun Tan in which an ‘exchange student’ arrives, strange things happen, and then he departs. This is a story with a similar plot, asking different questions.

The drama begins on the very first page when a little girl’s father runs over a man on the road. At first he thinks he’s hit a deer, then he is worried he’s killed a man, but the man seems to have little wrong with him other than being struck by amnesia and rendered speechless.

It soon becomes apparent to the reader that there are supernatural elements in this story: The doctor’s thermometer is ‘broken’ (not registering life heat at all); the visitor has a way with rabbits, and is highly interested in the flock of birds flying across the sky.

When the stranger leaves, however, the reader is not told why and we never find out if this is a dead man who seems alive, if he has magical powers which stop the trees from turning orange, where he came from or where he is going. There are just enough strange things in the illustrations to really make the reader work hard. For one thing, the stranger looks very much like the little girl’s father. They wear similar clothes. This may partly be because the stranger has borrowed the father’s clothes, but even their face and hair is the same. The stranger is a lot happier than the father, dancing and singing and taking time to sit with her on the grass looking at the sky. Perhaps this is a little girl imagining what her father could be like (but isn’t), or perhaps this farmer father has had a very good year crops wise, due to the weather (part of the story), and the little girl has constructed her own story about the newly exuberant father who suddenly seems to be in a wonderful humour.

The illustrations are coloured pencil, with a variety of sketching techniques: the trees look pointillist, and the sky is drawn with long, continuous lines. The colour overlaid upon colour invite the eye to linger. The autumn colours of the surrounding farmlands are an important part of the plot and are rendered beautifully.

Not only is colour striking in this book; page design is beautiful too.

After the visitor has departed, we see a birds’-eye-view of the father, mother and girl as they stand on their front lawn, wondering where he has gone. This point of view suggests that the visitor has flown upwards, into the sky and therefore into some supernatural world, and the viewer now sees the family from his perspective. As the story draws to a close, so too, do the family get smaller and further away.

This is a wonderful story and one of my favourites, designed especially for readers who are happy with ambiguity in picture books. 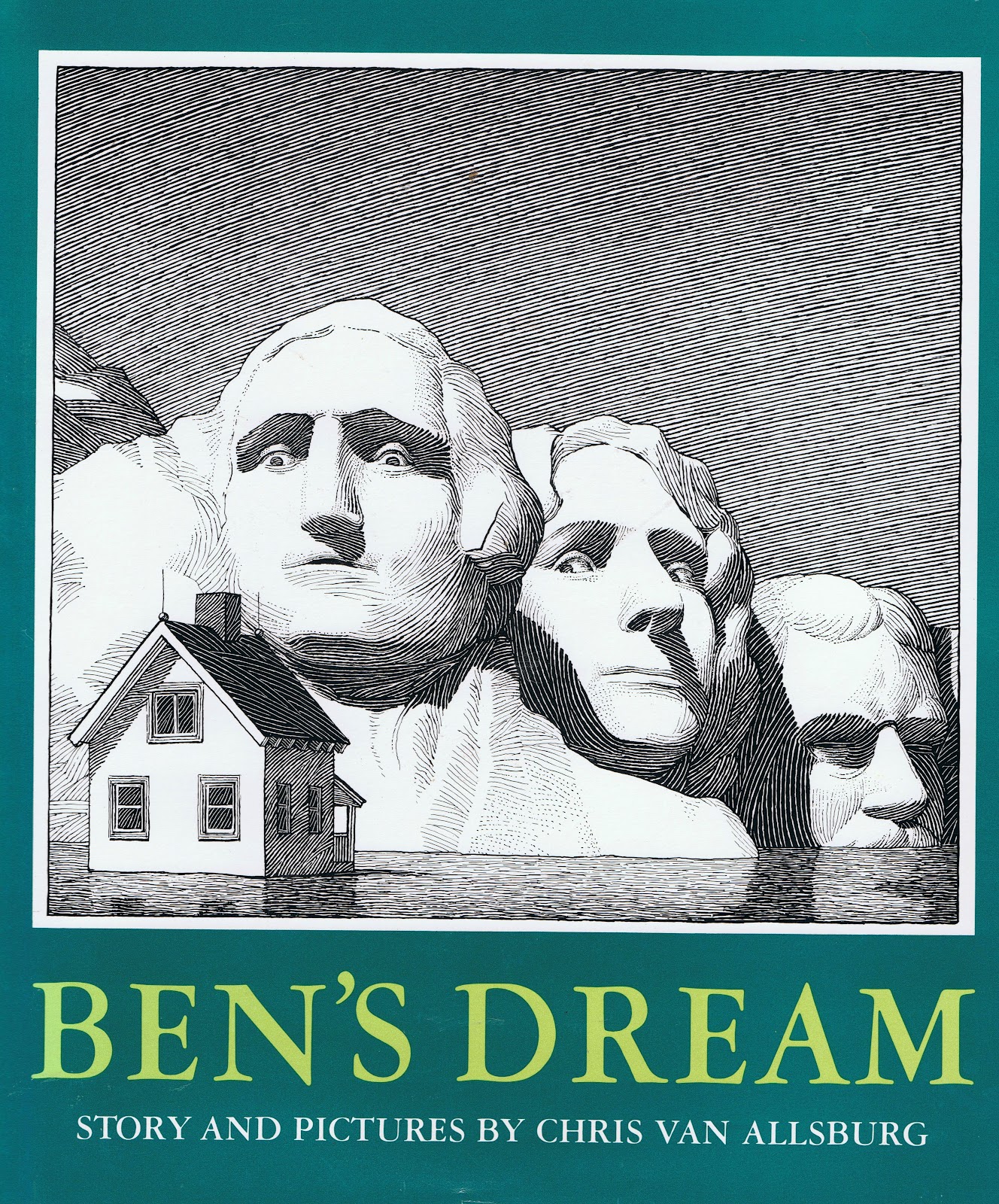 The two child protagonists are a little older than most characters in picture books. A boy and girl walk home from school together before each going to their own houses to complete a geography assignment. Finding his parents out, Ben falls asleep in a chair and dreams his house has turned into a boat in a giant sea. The words end and the black and white linocut illustrations continue to tell the story, as Ben floats past various famous world landmarks. He is woken abruptly by his friend Margaret who has come to ask him to join her in a game of baseball. This is where the words begin again. She tells him that she has had an amazing dream and it turns out they’ve had the same dream.

Van Allsburg makes use of various children’s storytelling techniques in this one: Absent adults (there’s a note in the illustration to say the mother has gone shopping), dreaming to enter a strange world in which anything can happen, and an ending which suggests the story wasn’t just a dream; it was something more and some unnamed magic must have been involved.

This story would be an excellent way to introduce children to some famous landmarks.

THE MYSTERIES OF HARRIS BURDICK BY CHRIS VAN ALLSBURG (1984) 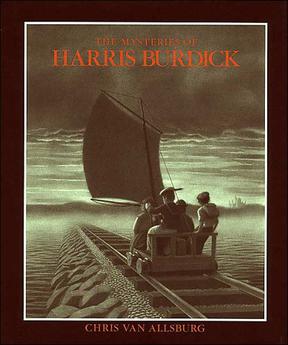 This is a collection of pictures which do not form a sequential narrative in their own right, each one telling its own story. This would be a wonderful way to inspire a class of students who are about to embark on a creative writing exercise.

The Polar Express was adapted for film.

As an adult viewer I find the film adaptation a little drawn out in an attempt to create something highly commercial out of a much-loved children’s book, but I feel this would have been better as a short film of about 20 minutes, like the adaptation of Julia Donaldson’s The Gruffalo.

The reason the book works so well is because it manages the reader’s emotions so well. We feel the excitement of the boy as the Polar Express turns up at his house. We feel his pride when he is the one picked to receive the first gift of the year. We especially feel his disappointment when he learns that he has lost the bell through the hole in his pocket. This disappointment is conveyed perfectly by the boy who hangs his head and the concerned and consoling children who surround him on the train.

It’s at this point in the story we wonder if this is all a dream. But Van Allsburg likes to play with the reader in this sense. The next morning there is a bell waiting for him under the tree, with a note from Santa to fix the hole in his pants. The parents think the bell is broken because it doesn’t make a sound, but the children think it makes the most beautiful sound in the world. This part of the plot seems especially ingenious, playing on natural human hearing loss, in which only people under 20 can hear the highest pitches, with our hearing range gradually narrowing with age. In this case, the message is that imagination gradually narrows with age, and the final page is a reminder that we can keep our minds open if we try hard enough.

THE WRECK OF THE ZEPHYR BY CHRIS VAN ALLSBURG (1983)

“The Wreck Of The Zephyr” is framed by a young boy speaking to an old man on the beach, next to the wreck of a small boat. The boy wonders how it came to be there. The old man spins a fantastic story about a boy who flew it above the clouds before crashing down and breaking a bone.

A slightly sophisticated reader should infer that the old man telling the story was the boy, though adult readers may infer that this old man’s gone a bit loco or is making up a story for a naive younger audience.